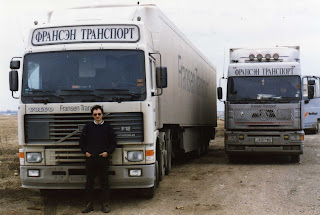 'Although the market places a higher value on Henk's labour than mine I don't envy him his salary; I'd rather be chained to an F12's steering wheel and the open road than to a desk, the balance sheets and the responsibilities that accompany a position in senior management.'
Karl Marx and Careful Driving describes an external journey at the wheel of an articulated lorry and a parallel, internal voyage of exploration, presented as a stream of consciousness. The external and internal journeys must mingle seamlessly. It helps me sometimes to think in musical terms. Like the classical concerto, the book is divided into three vertical ‘movements’ or sections. Although each journey dominates its section just as the solo instrument dominates the three movements of a concerto, it will be enriched and harmonised by contrapuntal layers of narrative – the orchestra. Just as musical themes are exchanged between the solo instrument and the various sections of the orchestra, certain common ideas will emerge from each horizontal section of the narrative to form key themes. I have colour-coded the various layers of the manuscript in order to identify them more easily:

I began the project with the idea that roughly 75% of the narrative would be allocated to the journeys themselves and remaining 25% would be concerned with the stream of consciousness but as I research political history and philosophy I find these subjects so compelling and fascinating that Karl Marx and Careful Driving is threatening to become 75% 'Karl Marx etc' and 25% 'Careful Driving'. An extract that I read out at a recent meeting of Severn Valley Authors (http://severnvalleyauthors.blogspot.com/) was criticised by my fellow scribes for containing too much history and philosophy and not enough travel but I don’t believe the change in emphasis is necessarily a bad thing – assuming the reader’s interest can be retained. The idea invites comparison with Robert M Pirsig’s cult classic Zen and the Art of Motorcycle Maintenance but I didn’t find the way Pirsig linked his motorcycle journey to his philosophical meanderings very satisfactory. I hope to do better.

I have scribbled the following instructions in my notebook:

Weave personal experiences, history and philosophy into a tapestry.

Use links to and from the main narrative to introduce personal and political history. If you can't link it, don't use it.

Imbue book with same sense of fun that underpins 'Why Don’t You Fly?' (I’m hoping that this is intrinsic to my writing style and I won’t have to work too hard at it)

Make history, geography and politics of each region come alive.

Be careful with politics, philosophy and history: research them properly and make sure they are relevant and that what you write is your own ‘take' and not somebody else's.

Above all the book must be about human nature. Contrast the inhumanity of Soviet Communism with the humanity of the characters described in the journeys.

The key to success is to get readers to see something of themselves in the narrator.

That last point is crucial. Unless the author is honest about his experiences and his reactions he is unlikely to gain the reader’s empathy.
Posted by Chris at 22:52 No comments: