Bill Nicholson, the Tottenham manager, said, 'It is better to fail aiming high than to succeed aiming low. And we of Spurs have set our sights very high, so high in fact that even failure will have in it an echo of glory.' 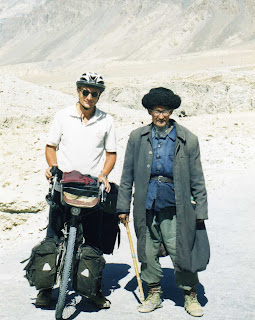 I set out to cycle from the UK to Vladivostok but I had to terminate my journey after 16,500 miles at Beijing. I was distraught and the disappointment lasted for several weeks after I returned home but I have since consoled myself with the thought that I failed aiming high, and I like to think that the failure had in it an echo of glory.

The greater the challenge you set yourself, of course, the more likely you are to fail in your endeavour. Karl Marx and Careful Driving is even more ambitious a project than cycling to Vladivostok. The idea for the book goes back to 1993 when I was allocated a brand-new Volvo truck specifically designed for the ultra-long-haul journeys to Russia and the republics of the former Soviet Union. As a University-educated lorry driver I felt that I was almost uniquely qualified to chronicle adventures involving potholes and blistering heat in the summer... 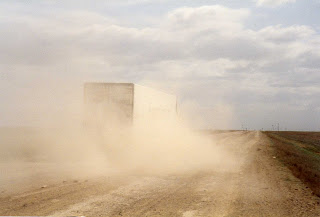 'A series of ripples in the tarmac regularly threaten to wrench the steering wheel from my grasp. All the authorities have to do to prevent speeding is to stop repairing road surfaces; frequently I am obliged to reduce speed to a crawl, my attention completely focused upon the area of worn tarmac immediately ahead. People break the law because national speed limits have remained static in the face of improvements to both roads and vehicles. From time to time my thoughts stray to the bottles inside the trailer and I wonder uneasily if they’ll all be empty by the time we eventually reach Aktyubinsk.' (Photograph courtesy of Jeff Johnston) 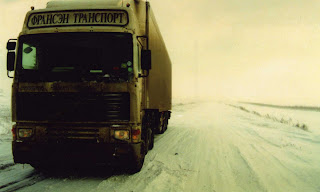 'Whereas in the summer I lamented the lack of mountain ranges to add topographical and meteorological diversity to the immense plains of the east, I now bless the fact that if the earth were flat one would probably be able to stand on the top of Shropshire’s Clee Hill and see right across to the Urals. One drive axle and a single steering axle out of six don’t make either for effective traction or directional control and the fewer the bends and gradients to be negotiated the better. Mountain passes I can do without.' (Photo courtesy of Jeff Spencer)

...and an armed policeman riding in the passenger seat to discourage bandits – all at a time of great political and social upheaval in the former Soviet Empire... 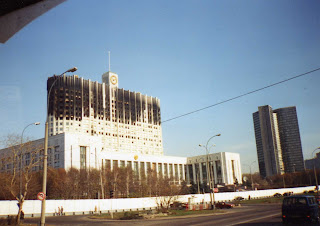 'It is the complications that have made my driving career memorable. Collecting the guard who was to accompany Tony and me on the trip to Tengiz in October was aggravated by the attempted coup d’etat mounted by Rutskoi and his fellow hardliners in the Kremlin. The parliamentary buildings had been shelled by tanks under the command of Boris Yeltsin and the city centre was in turmoil. A couple of months later the damage done to the ‘White House’ by the shelling is still evident in the scorched and blackened upper storeys.' (Photo courtesy of Richard Breakwell)
I kept an A4 page-a-day diary and made entries every day for a year before swapping life on the road... 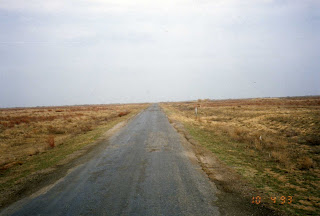 'Through this immense and seemingly uninhabited land runs this unforgiving road, an endless black ribbon stretching away to the shimmering horizon. The desert must be further south; at Uralsk the Tengiz-bound cargoes would have followed the Ural River due south towards Atirau and the shores of the Caspian Sea, but our destination lies to the east.' (Photo courtesy of Jeff Johnston)

...for a job in the office in order to have more time to write. The book's first incarnation as Driving Dorabella failed to make an impression with publishers, and I gave up when I was made redundant after five years working in the office.

If at first you don't succeed... Redundancy was the catalyst for the ride to China and a second, more successful effort at writing a travel book. Writing is like any other skill: you improve with practise. 'Why Don't You Fly?' was published in August 2005. Driving Dorabella didn't succeed because ten years ago I was still a beginner in the art of writing. I know that I am a far more accomplished writer now than I was then and I have high hopes that the book's second, very different, incarnation as Karl Marx and Careful Driving will fare better.

I feel that it is my destiny to write this book. The following extracts from Jean-Jacques Rousseau's Confessions strike a chord: 'Of the various works I had on the stocks there was one on which I had long meditated and to which I was more attracted than the others. To it I was anxious to devote the whole of my life, for it would, in my opinion, put the seal on my reputation. This was my Political Institutions. It was thirteen or fourteen years since I had conceived the original idea for it... Although I had been engaged in this work for five or six years I had not got very far with it. Books of this kind require reflection, leisure and quiet. Besides, I was working on it, as they say, behind closed doors, and I had preferred not to communicate my plan to anyone, even Diderot. I was afraid that it would seem too bold for the age and the country in which I was writing, and my friends' alarm might hinder me in the execution.'

It has been several years since the book's original conception and I am similarly secretive about the manuscript. Books of this kind require reflection, leisure and quiet. The only people to have seen any of the manuscript are my partner, a couple of close friends and my fellow members of Severn Valley Authors (http://severnvalleyauthors.blogspot.com/).

Far from hindering me in the execution, Robert Ronsson, author of Olympic Mind Games, was moved to write the following letter to a literary agent after reading a couple of early chapters:

'I'm taking the unusual (and, I admit, impertinent) step of suggesting you look at the work of somebody else. His name is Chris Smith. Chris lives in the same town as me and asked me to critique the opening ofhis book. I've read three chapters and I am really excited about it. Chris drives articulated trucks for a living and his book describes three trips to Kazakhstan in the early nineties shortly after the break up of the Soviet Union. What makes the book unique and compelling is that Chris intersperses his travel writing with musings, sometimes serious, sometimes humourous, on philosophy, life and the human condition with particular reference to the writings of Karl Marx. The book's title is Karl Marx and Careful Driving. Chris, who graduated from Nottingham University with a degree in French, has a nearly complete manuscript but, because he's working full-time (and he's a bit of a perfectionist), he reckons he needs another two years to complete the intricate job of shuffling the parts together to make a cohesive piece. If he had an advance he could take a break from driving and finish it in months rather than years. You may like to look at Chris's first book, which he published himself. It's called 'Why don't you fly?' and is an account of his solo bike ride from Worcestershire to Beijing. You can look it up on Amazon. I know you are inundated with submissions but I bet not many come from third parties who have no interest in the manuscript or the writer other than the thrill generated by reading something innovative and exciting. Would you be interested in seeing a submission?'

Nothing came of the enquiry but Rob's reaction has given me a great deal of encouragement. At the beginning of 2010 I am pondering whether to divide the book into two or three separate volumes (one volume per trip), firstly to reduce its size to something more manageable for the average reader, and secondly to get at least part of it off to publishers within the next couple of years; I don't want to repeat the experience of Rousseau, who never completed his Political Institutions. The only section published was The Social Contract, but it sufficed to establish him as one of the greatest and most original thinkers of the Enlightenment.

Karl Marx and Careful Driving won't have the impact of Rousseau's A Discourse on the Origin of Inequality or Marx's Communist Manifesto but it might establish my reputation as an 'innovative and exciting writer.' At any rate I believe the book has the potential to end up as a cult best-seller along the lines of Zen and the Art of Motorcycle Maintenance.

No-one finds real success by aiming low. I am aiming so high that even failure will have in it an echo of glory.