Reasons to be cheerful

January 2010 has been a strange month. The strangeness began on the seventh when my bicycle hit black ice and dumped me upon the unyielding road at around 7.30 a.m. on the way to work. I remember being frogmarched into a house at the roadside, mumbling 'Don't worry, I'll be fine...' An ambulance took me to hospital where the doctor was more concerned about the bang to my head than the pain in my right hip, which had taken the brunt of the impact. She told me to get 'a responsible adult' to keep an eye on me for the next 24 hours and to rest for a couple of days. In the absence of 'a responsible adult' Linda came to collect me and we drove home along the road where I'd had my accident in order to collect the bike but I was unable to find the address given to me by the ambulance man. The problem was solved the next day by an unexpected email:

Hi Chris. I was the girl with the dog from this morning. I really hope you are ok after your nasty fall. I know you were a little confused (naturally) and was worried you might not have remembered where your bike was. (I imagine it to be your prized possession!) It is at my sisters house, safely in the shed.

There followed details of her sister's address, directions, phone number and 'best wishes for a speedy recovery'.

Dear Victoria, (I wrote back) Many thanks for your concern and for having the initiative to note the website address. I'm basically OK - just a little sore. I've been told by the hospital doctor to take things easy for a couple of days. You are right - I have been worrying about the bike and wondering just how I'm going to collect it when I have only the vaguest recollection as to where I fell. I think I must have blacked out for a few seconds because I have no memory at all of a girl with a dog! My partner came to collect me from Worcester Hospital yesterday morning and we drove up the road but couldn't locate the Cottage. I'll phone you later today on your mobile. We may try to collect the bike if road conditions permit. Thanks again.

We duly recovered the bike but I was experiencing the kind of excruciating pains in my badly swollen hip that I associate with fractures. Linda drove me to Kidderminster Hospital where the X-ray failed to show the expected fracture but the doctor told me that the swelling was a haematoma. The stabbing pain I was experiencing was the mass of clotted blood pressing on a nerve.

I'd like to thank Victoria Lacks again for scraping me off the road and her sister Caroline for looking after my bike and for welcoming a dazed, incoherent and - as she confided in me when I collected the bike - a rather 'scary' figure into the warmth of her cottage to await the ambulance. At the beginning of February the swelling on my hip has almost disappeared but I'm still getting isolated stabs of pain and I haven't yet gone back to work. I am more mobile but don't feel up to walking the dog for more than around twenty minutes, let alone do any running or cycling and I still can't lie on my right side when in bed.

In other respects January has been a good month. The haematoma hasn't affected my fingers and the head injury I sustained merely left me a little woozy for a couple of days, so I've had sorely needed time with the manuscript of Karl Marx and Careful Driving and it has benefitted accordingly. 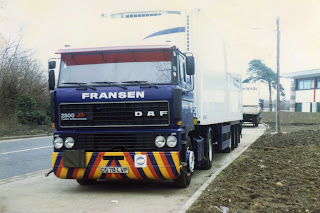 'During the first few weeks at Fransen the gap between essence and existence appeared to be unbridgeable and at times I teetered on the brink of despair. I'd stumbled entirely by accident upon one of the most coveted driving jobs to be had. Fransen's drivers saw themselves as an elite and were the most demanding and ruthless of critics. Any failure to match the standards they set or to pull one's weight wouldn't be tolerated and inexperience wasn't an alibi that I'd be able to use for long.'

Other reasons to be cheerful came in the form of three more emails from readers of 'Why Don't You Fly?' The indifference shown by mainstream publishers to the book means that, like so many other people who love writing, I haven't been able to give up the day job. Fortunately that indifference doesn't seem to extend to the book's readers:

Chris,
I look forward to being able to buy your next book; Marx/Driving. I wish you good luck in finding a publisher because I have just been enthralled by 'Why Don't You Fly?'. I can empathise with your efforts just a fraction. After the collapse of my parents' health I decided to cycle from 'new' home to 'old' home, Isle of Wight to Blackpool. It turned out to be a brief Odyssey plagued by a deluge of biblical proportions for its second half. At 422 miles cross-country in 3 days it pales in to insignificance with your own achievements but just allows me a tiny insight into the stimulation of the human spirit that challenge, difficulty and adventure can engender. Having also travelled in some of the countries that you wrote about, I also thank you for your reflection on their precious contrasts before globalisation rapidly shrinks too many of them. You write very well.
Again, Good luck.
Paul Lyon

Hi Chris,
My husband got me your book for Christmas, and as he's a really keen cyclist (and I'm not) I suspected it might be more of a present for him to borrow! I couldn't have been more wrong -- it is a wonderful book and makes a refreshing change from other cycling/travel books I've dipped into. I've just visited your website to see the photos, and came across your essay about writing and being published. I am a writer too and I find your views very realistic about the real way publishing works, something that hardly anyone seems to acknowledge. Well done for hanging in there and getting the book out to readers. I look forward to your new book coming out. Best wishes,
Josie Aston

Dear Chris,
Your book ' Why Don't you Fly' was fascinating. I have been reading travel books for years, always looking for the 'wow factor'. More recently and more specifically my interest has turned towards cycling adventures. Whilst your story started slowly I soon found myself endulging in your next adventure and imagining what it must feel like, the frustration and relief, the isolation, the incredible people and landscapes. I am sure that you have many people writing to you and saying what I am about to say, but I do not mean it to be a cliche, rather my honest account. My personal interest is in some ways similar to yours, the daily grind of working in London is getting in the way of what I really want from my life. So the ending of your book coincides nicely with the handing in of my resignation. Destination London to Australia by bicycle. Of course I am not as brave as you and without my fiance I am sad to say I would never have thought it possible. But here we both are, counting down the last weeks before we leave. So thankyou for keeping me motivated and proving that it is possible. The number of times I have been asked 'Why Don't You just Fly' made the title of your book so fitting.
Cheers, Kelli

This is why I write - and what better reason could one possibly have? Many people dream of winning the lottery but the knowledge that my writing has brought pleasure to complete strangers makes me far richer than any amount of money. I'd like to take this opportunity to thank Paul, Josie and Kelli for getting in touch, and I'm deeply grateful to the many other wonderful people who have taken the trouble to email or write to me. Your letters and emails have made all the countless hours spent in front of the computer and poring over the manuscript infinitely worthwhile. They have vindicated my decision to dedicate my life to writing... 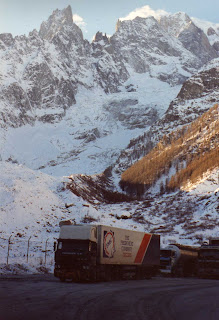 'Intoxicating highs were followed by subterranean lows. The exhilaration of crossing the Alps in bright sunshine in a giant DAF pulling a tri-axle trailer loaded with twenty tonnes of peaches from sun-drenched Ravenna was the stuff of dreams but it would be counterbalanced by the horror of a delivery at 3 a.m. in the insanely congested streets of Spitalfields market.'

...and are a source of encouragement during those inevitable periods of self-doubt when I suspect that what I'm writing is garbage and wonder if anyone will bother to read it. A selection of readers' comments can be found by clicking on the following link: http://www.cycleuktochina.com/Readers.htm.

On the penultimate day of the month Linda drove us into Birmingham to see Daniel Barenboim conduct Schoenberg's Verklarte Nacht and perform Beethoven's majestic Emperor piano concerto. I think friends can be defined as 'those people without whom the world would be a poorer place' but there is also a handful of people whom I've never met without whom the world would also be a poorer place. Daniel Barenboim comes into the latter category. I was brought up with his early recordings of Mozart's piano concertos and a packed Symphony Hall audience was enraptured by his virtuosity and brio at the keyboard. When announcing the encore (a dreamy Chopin Nocturne) he displayed a nice sense of humour in wagging an admonishing finger at us for preferring the Beethoven to the Schoenberg.

'Daniel Barenboim is a great man,' commented my father when I told him about the concert. Brilliant people perform a service to humankind by showing the rest of us what is possible but Barenboim's greatness doesn't lie just in his legendary status as a performer and a recording artist; he is a visionary who believes in the potential of music to bridge political divides. In 1999 he collaborated with the Palestinian literary scholar Edward Said to found the West-East Divan Workshop, a project designed to bring together young Palestinian and Israeli musicians.

Barenboim's long-term vision contrasts starkly with the paucity of genuine vision that exists within Westminster. The months leading up to a general election ought to offer us an opportunity to witness a series of exciting debates about the long-term destiny of the United Kingdom. Nobody in either the party of government or the opposition appears to have a vision that extends beyond offering the electorate a series of short-term bribes intended to persuade it to vote them into office for the next five years. Three months of sterile and unprincipled bickering is a deeply depressing prospect. None of our politicians will achieve greatness until their vision extends to serving others before themselves. Their presence in the world might in that case make it a better place for millions of people who have never met them.