The Indignity of Work

Karl Marx and Careful Driving is a study of 'what it is to be human'. I was drawn to long-distance truck driving by visions of empty roads and huge skies and the idea that I'd be captain of my ship, and for a few years, while I was driving all over Europe for Fransen Transport, those dreams were wonderfully fulfilled. 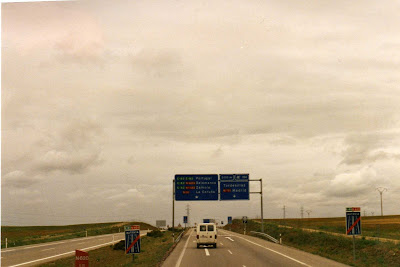 I have started to log dates, mileages and fuel consumption. The 20,711 km on the odometer have been accumulated in the past eight weeks through return trips from the United Kingdom to Belgium (2174 km), Holland (961 km), Moscow (7,431 km) and Kostroma (8,141 km). I was granted a single day at home in those eight weeks, between the long Moscow and Kostroma trips. After completing the return trip to Kostroma I was allowed Monday and Tuesday off before catching the train to Kidderminster last Wednesday afternoon. To survive in a profession that demands so many sacrifices there can be no half measures; you have to love it with your heart and soul. I have never yet worked on Christmas Day but no other holiday is sacrosanct.  I have spent umpteen New Years Days, weekends, bank holidays and birthdays either behind the wheel or waiting on service areas or truck stops all over Europe for the statutory weekend or bank-holiday bans applicable to trucks to end. (From the manuscript of Karl Marx and Careful Driving)

Twenty years after I made my last return trip for Fransen, both the job and I have changed. I survived more than six years of driving all over Europe despite never wearing a hi-viz vest or steel toe-capped boots because I used common sense but these days your are prohibited from relying upon common sense by the health and safety regulations. I no longer love the job with my heart and soul. I no longer choose to drive abroad or even spend nights away from home. I can't imagine why anyone would want to put up with the long hours, poor pay, heavy traffic and a blizzard of petty, demeaning regulations designed for idiots.

Karl Marx claimed that human beings are alienated from their human qualities by dull, repetitive work on the factory production lines spawned by the industrial revolution.

In its blind unrestrainable passion, its werewolf hunger for surplus-labour, capital oversteps not only the moral, but even the merely physical bounds of the working day. It usurps the time for growth, maintenance and healthy development of the body. It steals the time required for the consumption of fresh air and sunlight. It haggles over a mealtime, incorporating it where possible with the process of production itself, so that food is given to the labourer as to a mere means of production, as coal is supplied to the boiler, grease and oil to the machinery. It reduces the sound sleep needed for the restoration, reparation, refreshment  of the bodily powers to just so many hours of torpor as the revival of an organism, absolutely exhausted, renders essential. It is not the normal maintenance of the labour power which is to determine the limits of the working day; it is the greatest possible expenditure of labour power, no matter how diseased, painful and compulsory it may be, which is to determine the limits of the labourer's period of repose. Capital cares nothing for the length of life of labour power. All that concerns it is simply and solely the maximum of labour power that can be rendered fluent in a working day. It attains this end by shortening the extent of the labourer's life, as a greedy farmer snatches increased produce from the soil by robbing it of its fertility. (Karl Marx: Capital)

As an agency driver I regularly work over 50 hours in a four-day week. A couple of weeks ago I worked 67 hours in 5 days. Average shift lengths are 12 or 13 hours, and they can be as long as 15 hours. I arrive home exhausted and with no opportunity to unwind in front of the TV with Linda or read, walk the dogs or work on my manuscript. There is barely enough time to shower and eat and snatch an inadequate 5 or 6 hours of sleep before getting up (usually in the small hours) to eat a banana, drink a coffee and pack my bag, secure it to the bike and pedal the 13 miles back to work. Using the car would save energy and a little time (probably no more than 15 minutes each way) but cycling the daily 26-mile round trip is one of the very few activities that makes me feel human during a thoroughly dehumanising 24 hours. It reminds me who I am. 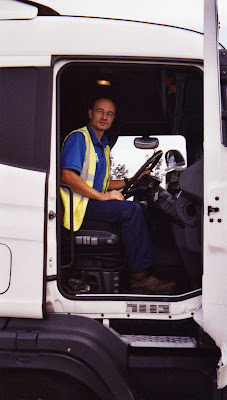 An enduring Magnificent Myth is that parliamentary democracy equates to 'freedom'. Universal suffrage by the whole people of representatives and rulers of the state - this is the last word of the Marxists as well as of the democratic school. They are lies behind which lurks the despotism of a governing minority, lies all the more dangerous in that this minority appears as the expression of the so-called people's will, claimed the nineteenth-century Russian anarchist Sergei Bakunin in his book Statism and Anarchy.

The Magnificent Myth We're all in it together has been discarded by the current government, presumably because even the Tories are unable to maintain such a barefaced lie following the lowering of the top rate of income tax from 50 p to 45 p in the £ and their abject failure to bring their cronies in the City to account for their irresponsible and  fraudulent practices over the past two decades. Bankers continue to earn massive annual bonuses for gambling with other people's money and our futures. We're all in it for ourselves would be a more appropriate slogan.

The claim by the Coalition that it is making work pay is another Magnificent Myth. Dismantling the welfare state so that it is no longer possible to afford even the most basic necessities on benefits is not 'making work pay'. Incomes have stagnated and the cost of living has soared so that working 50-plus hours a week is barely enough to cover the bills. The scandalous proliferation of food banks in what is still one of the richest countries in the world is evidence that many hard-working people with mortgages or rent to pay and children to support can no longer afford to eat. The vilification of the unemployed and the disabled as shirkers is a Magnificent Myth designed to deflect public anger against ministerial mismanagement of the economy by successive governments and the greed of the bankers and company bosses. The poor and the unemployed are a symptom of failed economic policies, not the cause of them.

Last week the chancellor made a self-congratulatory speech in which he claimed that the policy of austerity was bearing fruit and that Britain was on the road to recovery. He went on to thank the British people for their sacrifices over the past few years. I wonder if Mr Osborne would be willing to divulge some of the sacrifices he has made.

I suspect that the imminent recovery will shortly be exposed as yet another Magnificent Myth. Employers are driving down wages to maximise profits. The tax payer is subsidising those who either can't or won't pay their employees a living wage with working tax credits. This is the economics of the madhouse. Far from being bad for business, fair wages allowing for a decent standard of living are good for it because the economy thrives on people spending their earnings.

Marxism failed to take root in Western Europe because the owners of capital realised that if the workers had no spending money nobody would buy their goods. The gap between the exploiters and the exploited is getting wider. Marxist revolutions have been confined to countries in which the majority existed in poverty - such as Russia, China, Cuba, Korea and Vietnam. Osborne and Cameron be warned!

The Daily Mail's attack on Ralph Miliband under the banner headline 'The Man Who Hated Britain' has offended Ed and is creating a media storm. The Mail has since attempted to justify its position:  How can Ralph Miliband's vision be declared out of bounds for public discussion - particularly since he spent his entire life attempting to convert the impressionable young to his poisonous creed? it demands in a leading article entitled 'An Evil Legacy And Why We Won't Apologise'. There is a strong case to be made that Marxism is misguided but I would hesitate to describe it as either 'evil' or 'poisonous'. The Mail appears to be confusing Marxism with Soviet socialism, in which Marx's ideas were perverted by brutal and corrupt political elites to serve their own appetites for power and wealth to the detriment of the masses. Now that can be described in terms such as 'evil' and 'poisonous'. Marx was a champion of freedom who denounced inhumanity and exploitation in the strongest possible terms. He would surely have been horrified by the oppressive and brutal communist regimes created in his name.