I began March by tentatively embarking upon my first run since the fall and the injury sustained to my hip put me out of action on 7th January. Cycling and walking have built up my fitness but I was a little apprehensive about how I was going to feel after around eight run-free weeks.

Rose, who has has appointed herself as my personal trainer, insisted on coming with me. We ran along the river, the frost having helpfully hardened the muddy, slippery parts of the path, and then into the forest. I was wearing gloves but my hands, always the most vulnerable to the cold, were freezing. 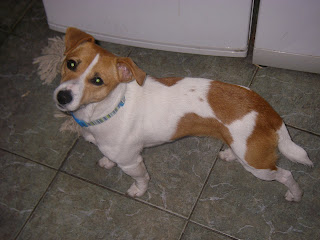 It didn't take long for me to warm up, however, and the crisp air and dazzling sunshine made the running a joy. Once in the forest, Rose becomes a hunter, her ears alive to the sounds and her nose to the scents made by the wildlife inhabiting the forest. 'Nature commands all animals and the beast obeys,' wrote Jean-Jacques. 'Man receives the same impulsion, but he recognises himself as being free to acquiesce or resist; and it is above all in this consciousness of his freedom that the spirituality of his soul reveals itself.' During a circuit of around six miles that even included a sprint, Rose was consistently beastly to the local wildlife and I wondered whether life dicates consciousness (Marx) or whether consciousness dictates life (Hegel). This is a debate that will recur throughout Karl Marx and Careful Driving.

I arrived back home less exhausted than I expected. Rose reclined on the sofa listening to a phone-in on Radio Five and ruminatively licking her nether regions while I peeled off my muddy running gear, showered and got changed. Assuming that there are no ill-effects I'll add twice-weekly runs to the cycling commuting I do four times a week. I run and cycle not only to keep fit, but also because I tend to get some of my best ideas for the book when out running or cycling to work. The physical activity seems to clear the mind and the seratonin released by vigorous exercise stimulates the grey matter. Inspiration is fleeting, precious and so fragile. Like the body, the mind thrives on regular exercise.

This morning someone was talking on the radio about the determination, drive and focus necessary to win a gold medal at the Winter Olympics. If determination, drive and focus was all one needed to become a best-selling author then 'Why Don't You Fly?' would be somewhere near the top of the best-sellers lists. Reviews in the media and the feedback I receive from readers (http://www.cycleuktochina.com/) reassure me that I possess talent too. Unfortunately you also need to find a mainstream publisher prepared to invest in your talent, and I've come to the conclusion that attracting a publisher requires more than just determination, drive, focus and even talent.

Ewan McGregor and Charley Boorman rode their powerful BMW motorbikes from John O'Groats to Cape Town, a 15,000 mile journey that took them twelve weeks. The BBC sent along a camera crew and made their adventure into a television series. Their ghost-written travelogue was written in about six weeks and almost instantly made it into the best-seller lists.

For the past three years I have been entertaining members of cycling clubs, the W.I., photographic societies, the National Trust, groups of businessmen, and audiences at festivals, bookshops and schools with a talk and slideshow about what it takes to cover 16,500 miles in thirteen months without an engine. My book took me eighteen months to write, and a further eighteen months, after countless rejections from agents and publishers, to get into print. 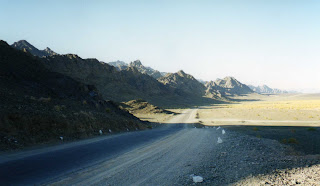 'These areas are often labelled "God-forsaken" for no better reason than that they are uninhabitable by humans, but I love deserts. Deserts are human-being-forsaken and the result is a natural perfection that is the most compelling evidence I've ever come across that perhaps, after all, there is a God out there somewhere. The constantly changing landscape of Baluchistan, from flat plains covered in shingle through rolling sand dunes to mountains, was a source of fascination. These are the last outposts of creation as it was meant to be before human interference. The silence that reigns in a desert is so overwhelming that it compels you to contemplate the nature of being and even enables you to tune in to the all but imperceptible music played by your soul, which I assure you is there but most of us are too distractied by other noises to pay any heed to it - and it is always worth listening to.' (Slide 25 of '16,500 Miles Without An Engine.')

Instead of a 1100 c. c. motorcycle engine my lungs and my legs powered me into headwinds, across deserts and up to mountain passes, and a wonderfully indomitable and reliable source of energy they proved to be. I set off without accomplice, satellite navigation or support crew. I wore out three sets of tyres, three chains, two pairs of boots and fell off the bike six times. It took a great deal of determination, drive and focus - and some of you would doubtless suggest considerable stupidity too. 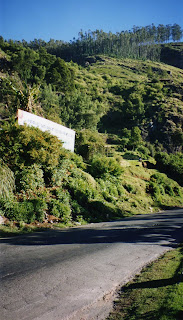 'The cool mountain air of the Southern HIll Stations of Kodaikanal and Ooty provided much-needed relief from the tropical stickiness of the plains below, but only at the cost of brutal ascents to heights of over 8,000 feet. I think brute strength and physical fitness will only take you so far on this kind of journey. I spoke of my body being my engine; as well as fuel (which was excellent here in India), the engine needs a spark to the plugs. That spark was provided by passion. Passion drove me into headwinds and up to mountain passes wehn my feet were smarting, my crotch was sore, and my back was aching. When my strength and energy deserted me through illness in Pakistan and China, passion was all that drove me on. I think that everything one does in life should be motivated by passion. With suffiecient passion you can overcome any obstacle.('Slide 33 of '16,500 Miles Without An Engine.')

Last week I spoke to an audience of sixth-formers at a school in Blackpool and this evening I'll be speaking to a women's group in Worcester about my stupidity. How does it feel to trade domestic comfort and security for life as a nomad and to pare one’s life down to the bare necessities? What is it like to push at the frontiers of one’s physical and mental endurance? What is the effect upon the human spirit of struggling against hurricanes in the Gobi Desert by day and shivering alone in culverts at night? How does the agnostic westerner react to the religious fatalism of Islam and Hinduism in encounters with locals? As well as attempting to answer these questions, I speak about the importance of having a dream, about connecting with one’s passions, and about recognising and seizing opportunities. 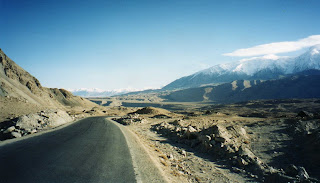 'Isolated from the north, west and south by mighty mountain ranges, and from the east by the world's second-largest desert, Xinxiang, the westernmost and largest province of China, is one of the most inaccessible places in the world. Although I'm not religious, I felt that the sheer perfection of this scenery is a far more telling tribute to the Creator (whoever he, she or it might be) than any man-made church, mosque or temple. The only imperfection in the scene is the road, but thankfully there are no vehicles on it to break the silence, for that too is perfect as soon as I dismount and my breathing quietens and my heartbeat slows. Cycling at these altitudes was lung-heaving work because of the lack of oxygen. (Slide 43 of '16,500 Miles Without An Engine.')

After each presentation I stay for as long as necessary to answer questions, and I usually manage to sell a few signed copies of 'Why Don't You Fly?' We unrecognised, uncelebrated authors have to draw upon every drop of our determination, drive, focus - and talent - to sell our books.

Audiences seem to enjoy the presentations:

On behalf of Hagley Wives I’m writing to say a huge thank you for coming and telling us about your amazing achievement. We all had a thoroughly enjoyable evening. I can fully understand the personal satisfaction that you gained from your trip. I am very much looking forward to reading your book and seeing the pictures on your website. It was hard to believe that that relatively small bicycle had taken you across so many miles. If ever you do another journey, please let us know and we’ll have you back in Hagley to share it with us. Again, many many thanks for your visit. Ann Pagett (Programme Secretary)

Readers and reviewers alike have been enthused by the book:

Chris Smith seems to be a man of considerable talent. I lived every mile of his journey to Beijing, which included a four-month side trip around India. By the end I felt that I’d done the trip with him and enjoyed every inch. Buy this book! It’s a great read. Cycle Magazine

Smith’s smart, honest prose is crafted superbly and peppered with wonderful moments of drama, dialogue and real humanity. Asia and Away Magazine

For eighteen months I wrote, proof-read, edited and agonised over every word, sentence and paragraph of 'Why Don't You Fly?' myself. Tributes like the above therefore mean a great deal more to me than they would to celebrities whose memoirs are ghostwritten for them.

Celebrity memoirs guarantee sales, however, and that is all the justification the publishers need. A passion for writing, a love of the English language, determination, drive, focus and even literary talent aren't enough to earn a publishing contract because they don't guarantee sales.